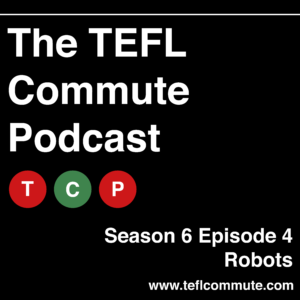 In this episode Lindsay returns to chat with Shaun about Robots. It’s almost a hundred years since the first teaching machine was suggested so are we finally at the point were robots can take over from us? Shaun and Lindsay discuss this and put it to the ultimate test as the topic of a TEFL fight.

Here’s the end of pod:

As your commute is coming to an end, here’s an activity you can take into class. This activity is suitable for lower-level learners, and especially good for younger learners. Put students in pairs. One person is the ‘robot’, and the other is the ‘programmer’. The programmer has to give a series of simple commands, which the robot must carry out. To keep this from getting out of control, explain that the robot can only move its upper body while sitting down – so it can’t move around the room. Pre teach some language for simple commands, such as pick up/move/touch/put down/open/close. Students practise giving commands to their ‘robot’, then they swap roles and repeat the activity.